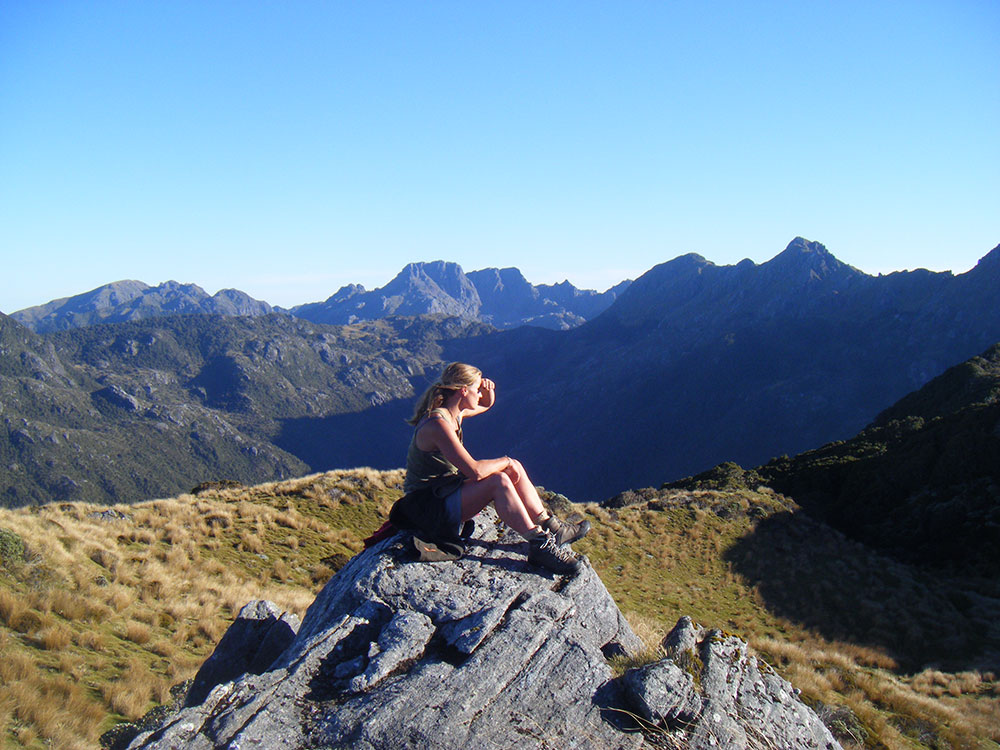 Intro: Miriam Lancewood has lived for seven years with her husband Peter Raine in the wilderness of New Zealand. They moved through the mountains like nomads, they slept in a tent, cooked on a fire and Miriam learned how to hunt with a bow and arrow. With minimal food supplies they survived mostly from hunting and gathering. She gave the word ‘survival’ a new meaning and in the current times, it seems all the more relevant. Yogalife talks to her to know all about her incredible journey.

What made you disconnect with the world? What was it that triggered this?

“I was working as a physical education teacher in a small town. Every weekend we would go hiking in the mountains, and every Sunday afternoon we dreaded going back. Eventually I thought: why should I work every day to make money, to pay rent, to buy petrol to drive to town, and to pay for stuff we don’t really need? Why not live in beauty and silence, and live off the land, the way our ancestors lived?

How has the experience been?

So, we gave away all our belongings, and moved with one pack and a bow and arrow into the wilderness. It was late autumn, and the first frosts were settling into the mountains.

The first two weeks required a major adjustment. Our mind had to slow right down to meet the much quieter rhythm of nature. During that time, I often felt bored and restless, but over time my mind became calmer. I felt at ease and I was not aware of passing time anymore.

What lessons/skills has this experience taught you?

But the first winter was not easy. I had practised with my bow and arrow for a year on a target. I thought I was ready for hunting, but I failed miserably. I didn’t see many animals, and if I did happen to see a rabbit, I would miss and hit the stone, rending my expensive arrow useless. Instead of meat, we ate rice and beans, that we had stored in buckets. Because we needed so much energy to keep warm at night, we woke up every morning with hunger pains. We were freezing and we began to lose weight.

We were forced to trap possums. A possum is an animal introduced from Australia and considered a pest in New Zealand. Nobody thinks of eating a possum, but we were very hungry and desperate to keep warm. The possum meat that first winter kept us warm.

After some time, my senses improved. My hearing became much sharper. I was relying on my eyes to see movement in the far distance. With my sense of smell, I could detect animals before I saw them, and I developed a sense of intuition of where the animals could be.

What have you learnt from nature?

We felt very small and insignificant compared to the vast landscape around us. During the years in the wild, our psychological problems seemed to dissolve, rather than being solved by analysis. Our mind became clear, and with this clarity we could make the right choices in daily life. With the lack of noise, we became more sensitive, and we felt what the other felt. Sometimes we met another person in the wild, and for a moment we could look through his eyes and instantly understand the world he or she was living in. We observed others and knew what to say at the right time. We realised that verbal communication is only a very small part of human relationship, and that we are not as individual as we think.

Sometimes we were four days walk from the nearest dirt road, but not once did I feel lonely in the wilderness. I felt surrounded by beauty. The forest, mountains, rivers, were so full, and so full filling, that we never missed anything.

What are the benefits?

In the wilderness are no mirrors. We lived without technology, no social media, no camera, no recording or storage of data. We were not aware of what we looked like, of what we should look like – or smell like. There was no comparison, and therefore no anxiety. We were concerned about the weather, whether thunder was coming, or the river would flood, whether I would find a goat for dinner. The mind has evolved that way, and it felt perfectly natural to be occupied with these issues.

Hunting animals, gathering wild plants, fording rivers, climbing mountains, sitting around the fire, came to me so naturally. It is in our blood, in our genes. I reconnected to my primeval self. Our ancestors lived this way and all these senses and skills are essentially dormant, but we can very easily reconnect living in the wilderness.

Is it easier to live life on the go rather than going with a plan?

Time is so precious in modern day society. Many people keep busy and have little time for reflection and contemplation. Our life in the wilderness was very quiet. We had an ocean of time. Once you live in the rhythm of nature, you enjoy the beauty of the smoke from the fire swirling through the branches, the colors of the smooth river-stones in the water, or the bright green leaves in spring.

Not many people would choose this way of life, because we have no security. We have a free life, but we had to learn to embrace insecurity. We have no fixed income, no house to go back to, no group of friends and I don’t see my family in the Netherlands very often. But for us, freedom is worth more than security.

We make no plans, because we want to leave space for spontaneity, and for opportunities we might never have thought of. We keep our eyes wide open.

We live with the open-door-philosophy. Meaning that we do not plan our future but rely on suggestions of other people. If someone offers to take us on a yacht to the Pacific Islands, we can say ‘Yes’. We’re ready for anything anytime.

As a child I was told to make my dream come true. However, that involves planning, financial investment and other sacrifices. Then you work like a blinkered horse towards your goal. It is much easier to be aware. Because maybe left or right, an offer is made and there is a little window of opportunity. With your blinkers on, you might just miss that offer.

What has being alone taught you? Does it help you to tackle life in a better way?

If something happens, we have to deal with it. I hope I have acquired enough survival skills to handle any situation. I feel centered and secure in myself. It is not a confidence based on comparison. It is an inner strength, like an inner fire.

Have I changed over the years? Yes. I now realise that walking on a cliff is dangerous, for I can fall to my death. A thunderstorm can be deadly, sometimes the wind can break a branch that could fall on our tent; flooded rivers have taken many people’s lives. I am afraid when I am faced with real danger. But I am not afraid of public speaking with an audience of 1400 people. Last year, I was invited to speak Melbourne and Sydney. I felt no fear because there was no danger.

Only if we have a desire to become something else than what we are, will there be fear.

Miriam Lancewood’s memoir Woman in the wilderness, became an international Bestseller, and is now available as an Audio and E-book, and translated into Dutch, German, Chinese and French. Look for more information on miriamlancewood.com

Letter to a sister in my first year in the wilderness:

Can you imagine a way of life so quiet, so timeless, so abundant and full that watching a single leaf fluttering from the trees, lifted into the air by a little breeze, turning silver in the sunshine is meaningful? To be rich enough to live without working and to live in the midst of such astounding beauty is truly a privilege.

To us, the promise of becoming wealthy isn’t so exciting anymore. I know what it is like to have the security of a job and of living in a house. I know the competitive world, where people fight themselves up the ladder of power and status. I know the world where pleasure becomes the meaning of life. What I don’t know though – and I thought I should – is the natural world we were all born in.”

The Crystal Connection to Healing -1

The Crystal Connection to Healing – 2

All you need to know about Immunity Boosters

Decoding Collagen Supplements for you

5 tips to be healthy from within

THE IMPORTANCE OF DAILY NASAL HYGIENE

What are anti-inflammatories and why do we need...