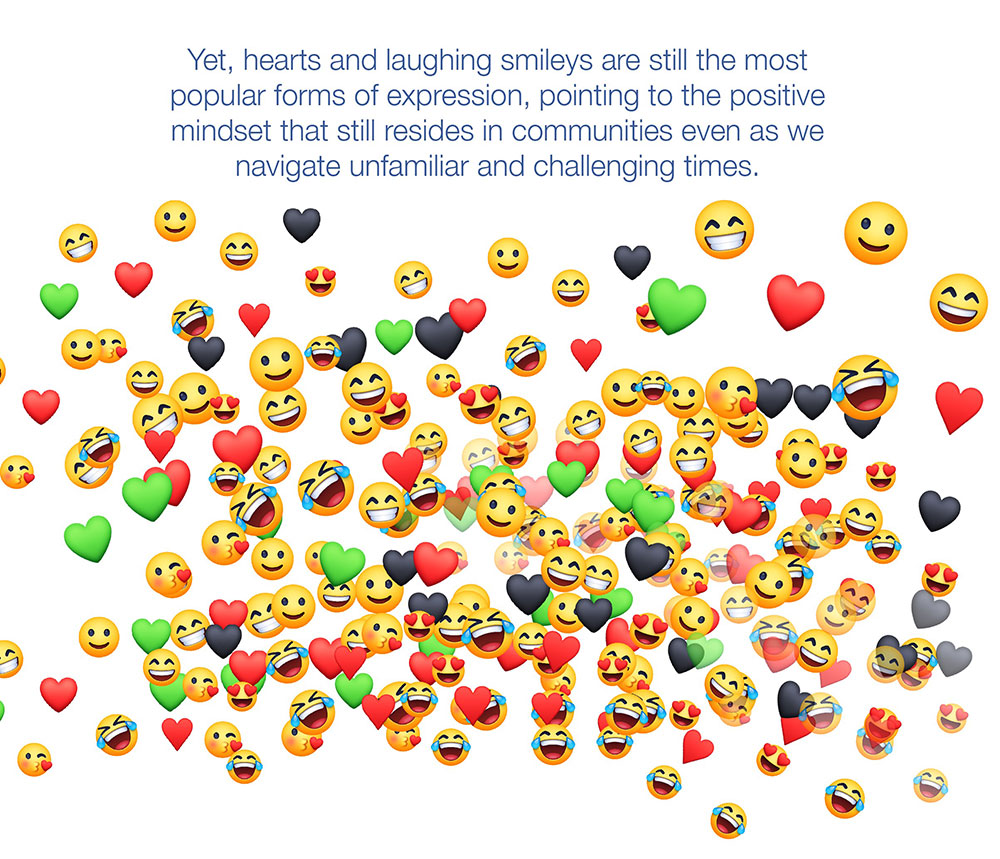 Say it with Feelings – the EMOJI way!

: We all know that “an image speaks a thousand words.” Driven by a desire for intimacy, in the midst of a busy world, there is an urge to convey our thoughts and feelings as we look to connect with others, more so in these testing times. This is reflected in the widespread use of a new vocabulary of emojis, GIFs and camera-based messaging, which helps us express ourselves in a more dynamic way. But what do emojis tell us about our personality traits? Dr Laila Mahmoud, specialist psychiatrist with Medcare Hospital Sharjah tells us all about how emojis reflect our personalities.

•  Do Emojis help us communicate better?

Emoji is the first-born digital world’s language to add the emotional flavor to texting, they first appeared in the late 90s and was limited to texting then spread later to emails and press.

•  Or do they hinder communication by allowing us to take the easy way out by using one and not using actual words to express feelings?

Emoji are of two types.

⁃   Add on meaning, which we attach to the sentences to add the emotional content and flavor for texting.

⁃   Replacement; it replaces the words, the text and here it is out of clear meaning as it is affected by the element of suggestion and second meaning like sarcasm, making fun of someone or delivering certain message.

Emoji facilitates the way of communications as add on after clear text but as replacement it is a matter of debate because there is multiple meaning for the emoji and this varies according to the individual perception, as I may perceive it something while the sender mean something else. Also, in some situations it may add spices and avoid harsh conflicts as it delivers the message either in a funny or a cool way, which may not have the implications of frank harsh words.

• If you use a lot of emojis, what does it say about your personality?

People who use too much emojis as self-expression are too much emotional, too much easy going, easily suggestible, funny, extrovert, sociable, sensitive, like to describe every fine details of his emotion, more toward frankness.

•  If you use a particular emoji often, does that speak about you as a person?

Using a specific emotion continuously can express more than just delivering a message, it may describe your emotional state, your deep feeling, your continuous mood, and sometimes it expresses a deep part of your personality like the continuous use of 😂😂 either you miss fun in your life or you try to escape your frustrations and doing reaction formations like (I’m not sad, I’m happy),

😔 continuous use of sad face in every texting may be a way to try to explain to the world I’m frustrated and sad and I need help.

Although it still differs according to the context and situation, but the relation of use can express personality trait more than a situational response.

•  Are we using them as basic relationship maintenance tools?

Yes, we are using them as a facilitator to help me delivering my messages and get out of the negative feeling like anxiety, worry, afraid of not delivering the meaning and giving wrong explanations attached with formal or just blank testing

• How seriously should we take emojis as a psychological tool to analyses a person with regards to his/her personality, self-expression, emotion, sentiment etc.??

⁃  Consistency, continuous use of same emoji in different contexts and different situations giving them different meaning according to the text, may be a sign it expresses something in you more than something you want to deliver

⁃  Feeling that this emoji expresses me, feeling happy while using especially the emoji that may not add too much to texting like:

⁃    👻: more toward a free soul, freedom, no restrictions in a person who has been under pressure for a long time

⁃  🌸: giving the impression of a peaceful soul, kindness, satisfaction is the main theme, altruism, I want me and others to be happy as well

⁃   🙏: more toward a grateful person, who appreciate others doing for him

But at the end for us to say emoji express personality not situational, continuous use in different context is the main feature

At the end emoji is a universal language that happiness, emotions, flavor to texting if not overused and loose its meaning.

17th of July is celebrated as World Emoji Day and Facebook in Middle East tells us about the top emojis used and its wide use in the region.

The people of this region heavily rely on emojis when posting and commenting on Facebook. Hearts and laughing smileys are the most popular forms of expression among people in this region, pointing to the positive mindset that still resides in communities even as we navigate unfamiliar and challenging times.

Here are the top 10 emojis used across the MENA region:

Face with tears of joy

Rolling on the floor laughing

In the world we live in today, the use of the face medical mask emoji   is also gaining popularity in the region.

Here Are 6 Self-Care Habits You Should Keep Post-Pandemic

All you need to know about Immunity Boosters

Decoding Collagen Supplements for you

5 tips to be healthy from within

THE IMPORTANCE OF DAILY NASAL HYGIENE

What are anti-inflammatories and why do we need...